WELCOME BACK TO AN AWESOME CRIME FIGHTING ADVENTURE OF COMIC UNKNOWN! While searching through the wilderness of everything indie, Comic Unknown stumbled onto Mega Maiden and Chop Chop Princess. Created by Andeh Pinkard, MM & CCP is Manga Sized Trade Paperback with 122 pages of geeks rioting. While ignoring that horrible pun, this tpb consists of five issues in which all are available for purchase as stand alone issues. While MM & CCP is not suitable for young readers, it is definitely worth dipping your toes into if your looking for a parody of superheroes. 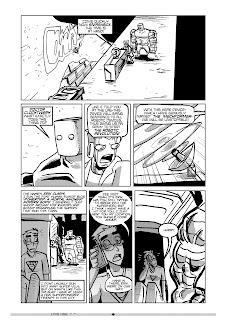 Today we will start off with just Issue/Chapter One, or Punch One in which Andeh Pinkard calls it. It builds the world of Mega Maiden and Chop Chop Princess. They are in a mission to become new superheroes of the city but aren't sure how to accomplish this goal. While bumping into another superhero in which they respected at first, they soon realize that he is a complete jerk. They find themselves in their first battle with a baddie with the help of a blogger named Erik. They confront Doctor Clockwerk and Smashbox, an evil genius bent on controlling all machines to create a robotic revolution and his robot hench...bot. The battle comes to a conclusion and while MM & CCP enjoy their great victory, they noticed that they need better costumes if they want to be taken seriously.

This manga styled comic is a very fun read. It shows that the two not so good aspiring super heroines have a shared love of punching criminals and delivering justice. While they are still honing their super skills, they meet some interesting characters along the way. It is a very entertaining read, Andeh would even considers it an adaptation of a TV drama (just humor him). Mega Maiden and Chop Chop Princess Issue 1 is available for 2.99, so get your copy now!


STAY TUNED TO COMIC UNKNOWN FOR FUTURE POSTS OF MEGA MAIDEN AND CHOP CHOP PRINCESS AND DON'T FORGET TO FOLLOW OUR FACEBOOK AND TWITTER TO GET INSTANT FEEDS OF EVERYTHING INDIE.
Posted by Jorge Alvarez