Andre Andre is a high school nutrition teacher in Taylor Tuckey, Michigan. He had become disillusioned at his job as students attention spans were becoming shorter. He sewed a costume of his own creation to become Banana Man. He then held a school assembly in the gymnasium where he preached the importance of potassium in the students’ diet. His speech was interrupted by a mysterious figure who was dressed in an ape outfit that had his own message about a bleak future where the Earth was overtaken by talking apes. This figure came to be known as Gorilla Guy.

Andre became obsessed with figuring out who Gorilla Guy was, but could not come up with a way to find him. He decided to attend a comic book convention where Linda Harrison, one of the stars of the original Planet of the Apes movie, was scheduled to appear. This turned out to work against Andre as the convention had lots of people dressed in gorilla costumes. Gorilla Guy did eventually reveal himself when he found out that Linda Harrison could talk. This enraged him because in the movie she was mute. Banana Man had created more weapons including nan-chucks and a bananarang, but he was topped by Gorilla Guy who had created a banana blade.

Banana Man was stuck paying for toys that were damaged in the battle. He did however find a raffle ticket that Gorilla Guy had dropped that was for his school raffle from which he deduced that Gorilla Guy must work at his school. While playing with his newly acquired convention toys, Andre was interrupted by Kelly, a fellow teacher, with whom he was supposed to meet to go over her lesson plans. Andre was very disappointed that because of his distractions with Gorilla Guy he had missed an opportunity to hang out with the hottest teacher in the school.

Andre then started looking around the school to find Gorilla Guy’s identity. After eliminating several teachers and the janitor, Andre was visited by a student, Alvin, who was offering to sell raffle tickets. Alvin informed Andre that he had been selling tickets in packs of five, so Andre offered to eliminate a detention he had given Alvin in exchange for Alvin rigging the raffle. Alvin would call off one of the tickets that was one number up from the ticket that Andre had found at the comic convention that was dropped by Gorilla Guy. During halftime of the school football game, Alvin called off the winning number where the winner would receive a George Foreman refrigerator.

The ticket belonged to Mr. Frank, the school science teacher. Banana man tackled Frank from behind, and accused him of being Gorilla Guy. Frank denied this, but Banana Man did not believe him until Gorilla Guy showed up behind him. Banana Man and Gorilla Guy had a brawl that encompassed the entire football field where Banana Man was finally victorious. Gorilla Guy was revealed to be Alvin who received another detention. Andre then started to notice a smell in his classroom where he discovered that someone had urinated.

Andre discussed this with the principal, Mr. John, who informed him that this had happened numerous times during the previous week. John decided to give Andre a chance to prove himself as Banana Man and assigned him the task of finding out the identity of the Tinkler. Andre was very proud of this, but he was made fun of by Mr. Frank who still resented being tackled. The two of them discovered the latest attack of the Tinkler in the teacher’s lounge where they found that the his attacks were not limited to the liquid method of human waste. Banana Man then created a cardboard cutout of himself that he wired with electricity to lure out the Tinkler.

This proved to be too tempting for the Tinkler as he was caught within minutes of it being set up. Andre was then reprimanded by John who did not approve of his methods. Luckily the student that was caught was not seriously injured, and he had a bad home life so his parents did not get involved. Andre was still discouraged that he was not making a difference in anyone’s life, and he tried making a poster to help better influence eating habits. This poster was defaced, and then the replacement poster was stolen. Frank continued to make fun of Andre to which Andre replied that he didn't care if he only reached one student it would still be worth is effort. This did not stop Frank’s taunts, but Andre eventually realizes that his life was not that bad. 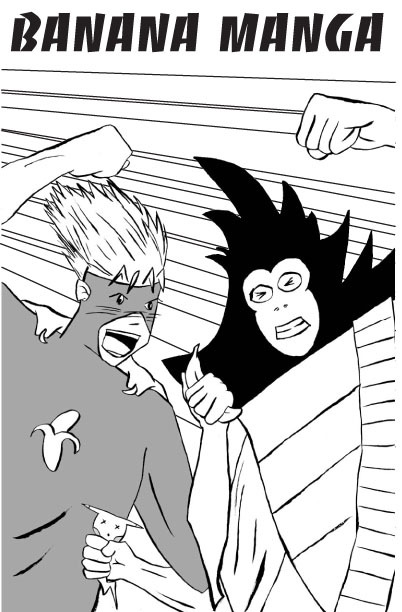 Unknown to Andre, it was revealed that there was a student that Banana Man’s influence had reached, and this student had stolen the poster to hang in his room at home. Mr. Frank was the next person to interrupt one of Banana Man’s assemblies. Frank was dressed in his own costume and called himself Yo-Yo Man. Banana Man chased him back to his office where Yo-Yo Man had set up a trap. Banana Man found himself strung upside down over a boiling vat of chocolate. He was able to escape with the help of Gorilla Guy. Gorilla Guy had been suffering from a nutritional deficiency which he was able to overcome by eating more bananas. Together Banana Man and Gorilla Guy pummeled Yo-Yo Man. All three were reprimanded by the principal, Mr. John. 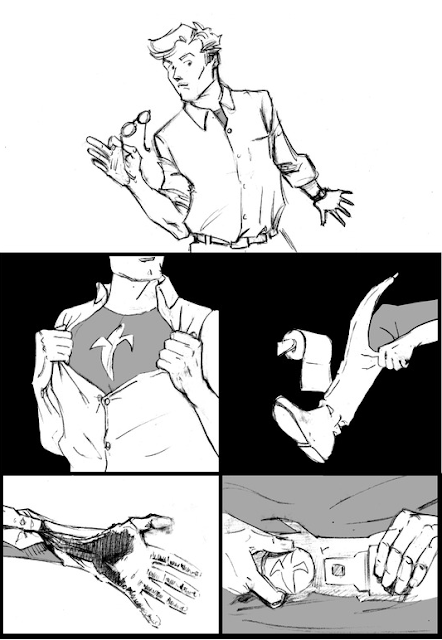 With much more to come, keep your eyes peeled for more of Banana Man from COMIC UNKNOWN. Don't forget to follow C.U. here and on twitter for an instant feed of everything C.U.