With great pleasure and an amazing opportunity, Comic Unknown had an interview with Scott Rogers, creator of Bedbug!!!


CU: What made you want to work in the comic book industry?

SR: I have worked in many exciting industries in my lifetime - video games, animation, movies, theme parks - but I have always loved comic books. I learned how to read from comic books, I went to art school because I wanted to draw comic books, I have attended (almost) every San Diego Comic Convention since the mid-70's because I love comics. I love that you can tell any kind of story with comics. I love how unique every comic is because of the individual artists and writers - it's a medium where you can really hear the voice of the creator. I love how everything is valid in comics - it's a very accepting medium in terms of style and genres. I have lots of friends that work in comics as writers, editors and artists but I myself never worked in comics because it's a tough business to be in. It takes a lot of work just to make one comic book! That said, making BEDBUG #1 was something I had promised myself I would do - ever since I was a little kid - I was finally was able to find the time, the energy and the money to make it happen!


CU: Who is your favorite all time super hero/villain? Why?

SR: I'm a HUGE Batman fan. I call myself an "amateur Batman historian." I have read every story, seen every cartoon and film, I have a special "Batman Bathroom" in my house decorated with original art, classic toys and vintage comics. Besides Batman, there are many other heroes that I love that influenced Bedbug in big ways and small: Spider-Man, Blue Beetle, Jack Knight Starman, Hellboy, Alpha Flight's Guardian... Too many to list! My favorite villain is a toss-up between the Hobgoblin, Doctor Doom and the Killer Moth (You can blame Chuck Dixon for that last one) - they're all classic baddies with striking visuals. Is it too late to mention I love the Taskmaster too? Darn.


CU: What made you create Bedbug?

SR: I created Bedbug when I was six years old. He was originally called "The Black Beetle." When my friends and I published Shooting Star Comics Anthology in 2002, I felt that the name Black Beetle was too close to DC's The Blue Beetle so I changed his name to "Bedbug" - which I was amazed no one had used before - other than a super-obscure Jack Kirby baddie. But besides wanting to see my childhood creation come to life in a comic book, I had felt that modern "heroes" were not acting very heroic. I couldn't relate to the "grim and gritty" amoral anti-heroes of the late 90's/early 2000's and even good guys like Spider-Man were married to supermodels! I felt alienated from my childhood heroes. Having just had kids of my own, I knew that Bedbug needed to be a father too and I wanted to address the issues that came with parenthood. I wanted Bedbug to be a character that someone like me could see a bit of themselves in as well be a hero they could look up to.

CU: With all the downtime between now and Shooting Star, do you have many stories prepared for the Leapin' Lawman?

SR: I have many unfinished outlines for Bedbug adventures in my head as well as written out. There is one over-arching plot - the mystery of the Boogeyman - which starts in BEDBUG #1. How many of these stories I actually get a chance to tell - well, time will tell!


CU: Are all of your characters from Shooting Star transferring to the Bedbug series? If not can we get a hint on who will?

SR: Every Bedbug character that showed up in Shooting Star Comics Anthology will eventually show up in Bedbug's new adventures. I like my characters too much to leave any of them behind! In fact, fan-favorite The Grave Robber and the Blue Tiger (who I think steals the show in one of the new stories) have their moment in the spotlight in BEDBUG #1.


CU: Are there many new characters?

SR: I love creating new characters, especially villains. New villains, the Boogeyman and Calamity, make their first appearances to the Bedbug-verse in BEDBUG #1 and sharp-eyed readers will spot a few other new characters lurking in the background.


CU: How many issues do you have in mind for the series?

SR: Right now I'm going to shoot for four issues. There will be some connections between them, but I'm a big fan of "done-in-one" stories - something I think is lacking in today's comics. They say that every comic is someone's first, so I want to create a way for new readers to hop in to Bedbug's universe without feeling lost or alienated.


CU: Are all issues going to be in color?

SR: Absolutely! Once you go color, there's no going back!


CU: What was the most difficult part of in creating Bedbug #1?

SR:It's a lot of work to create a comic on your own. Thankfully, I didn't create BEDBUG #1 all on my own. There are stories written by my friends Erik Burnham (Ghostbusters) and Chad Jones (Wrath of the Titans) and art drawn by Sam Ellis (Archer), Mitch Ballard, Drew Massey and Lane Garrison. I couldn't have created the book I wanted to produce without their invaluable contributions. (Thanks guys!) That said, finding contributors can be challenging but I always welcome people who want to play with me in Bedbug's universe!

CU: What was the easiest/funnest part in creating Bedbug #1?

SR: The funnest part is seeing people's reaction to the finished product. So far, the reader's responses have been very positive. When you work on something for so long, you have no idea if anyone is going to like it or not. I didn't publish Bedbug to get rich or famous but it is nice to be appreciated. :)

Last but not least here is ANOTHER preview for the upcoming Bedbug #1 comic. ENJOY! 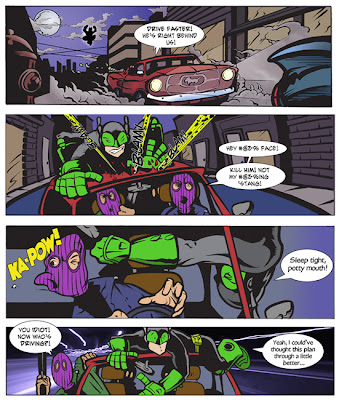 Want to know what else C.U. will have in store for you? Just follow the blog and/or twitter account here and you will see up to the minute updates of everything Comic Unknown!
Posted by Jorge Alvarez