Don't Mess with the Trashman

WELCOME TO ANOTHER FIST FULL REVIEW AT COMIC UNKNOWN! 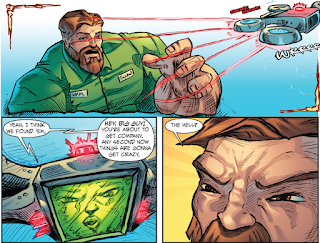 So imagine if our lore, legends and  myths of angels, giants and gods were more than just fables. Imagine if these beings have a lineage that reaches out to our modern society. In Hybrids: The Sons of Gods, we finally get to peek into a world with that society. Created by Luke Stone, Hybrids: The Sons of Gods follows Clarence the larger than average "trashman" from WM and we use the word larger lightly considering his biceps are larger than his coworker's head. Confronted by a drone with a monitor, the drone shows a person's message,  a warning to him that someone is after him and to go somewhere safe. Unsure of what is going on, Clarence seems a bit hesitant with the message until what seems to be a huge jet just speeding down the road heading towards him. 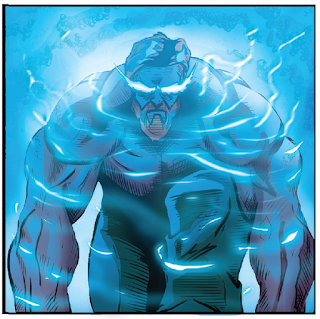 So what would be the first reaction one would have when they see this? Well the answer is obviously turn around without looking, crash into a car unharmed while immobilizing the car and flee.  With plenty of action to follow, Hybrids: The Sons of Gods is definitely a fun read with an awesome cover and art. It has action, comedic relief, and a great title for a book. We want to see where the story goes and we ponder whether Clarence is related to god with lightning and/or energy abilities considering the name of the title. With such a humble personality it seemed a bit strange for him to go by the name of Trashman but if a person that makes Arnold Schwarzenegger look skinny says he is Trashman, you cannot disagree with him. 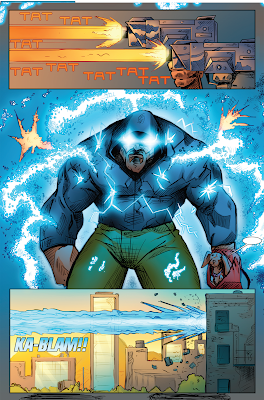 WANT TO HAVE A TENACIOUS GRIP ON HYBRIDS AND ALL OTHER BOOKS REVIEWED AT COMIC UNKNOWN? MAKE SURE TO FOLLOW US ON FACEBOOK AND TWITTER FOR NEWS, REVIEWS, INTERVIEWS AND GENERAL BADASSERY ON ALL THINGS INDIE COMICS.