Choose Your Destiny with Comic Unknown

Comic Unknown will like to introduce the first Haitian Superhero to the C.U. family of reviews. Spirit's Destiny: the comic of a headstrong high school student who becomes something greater. The book starts out with a fight between the parents and not the verbal kind, more like close quarters combat style of fighting. A very interesting way to introduce parents of our protagonist, we are introduced with father, a.k.a. Brian, (reminiscent of Deathstroke) inserting a syringe into his infant daughter. The parental spat was put to a halt when Brian heard the police sirens and took off. Destiny, now in high school, wakes up from what seemed to be a nightmare or was it a memory? Like mentioned earlier Destiny is a very headstrong high school student and she can be firm, especially to those who bully her. She clearly has those hereditary trait from somewhere, maybe it runs in the family. Some foresight is put into play when we find out that Destiny's mother Devine is working on a science experiment involving lasers. 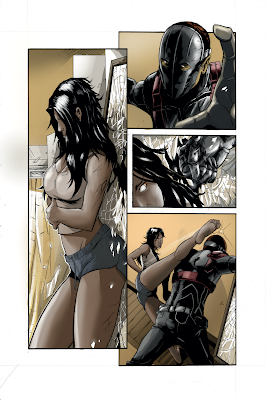 Devine gets a call from Destiny's school about her fight and grounds her daughter but kids never listens and with a little help from her friends she sneaks out to her mother's lab no less. After playing with the console Destiny gets hit with the laser and so begins the journey. Cover suggest Destiny has an elemental superpower of the sorts, so we wonder whether the laser gave her the powers or awoke the dormant abilities.The cliffhanger leaves us in a spot where we wanted a bit more out the the first issue but still has us waiting for issue 2. Spirit's Destiny is the first Haitian superhero comic that has crossed our paths and with first issue feeling more like a prologue than an introduction, we expect to see the story develop soon. The art and story are both smooth and performs well together thanks to the great creative team.


The story isn't hard to follow, flows well between the scenes and the artwork is very comprehensive and enjoyable from the fighting scene at the start to the accident at the end. Successfully backed in Kickstarter back in May 2015, Spirit's Destiny is available in both physical and digital format on Amazon for $3.99 and also available in Indystash's subscription box.

IF YOU WANT TO SEE HOW DESTINY SURVIVES THIS ORDEAL, FOLLOW SPIRIT'S DESTINY ON THEIR SITE AND FACEBOOK! MAKE SURE TO ALSO FOLLOW COMIC UNKNOWN'S FACEBOOK AND TWITTER FOR UP TO THE MINUTE UPDATES ON REVIEWS, INTERVIEWS AND GENERAL BADASSERY ON ALL THINGS INDIE COMICS!