We return to the dark, often violent, tale of redemption & the quest for the truth. Man of God Issue 4 was released at Derby City Comic Con in Louisville, KY on June 29th 2013. If you missed out, issue four has a womping seven different covers (including a blank cover variant). With the dark story of who John Morris is and his quest for the truth, we find John Morris finding his way back to the church but in a standoff with Detective Boone. A battle erupts between the two and John is faced with a decision of what he should do. Throughout this issue we see multiple action packed scenes in which we find a character in a tough spot. If it wasn't John, it was Vince temporarily finding himself on Perpes bad side. The cover speaks for itself on issue 4. 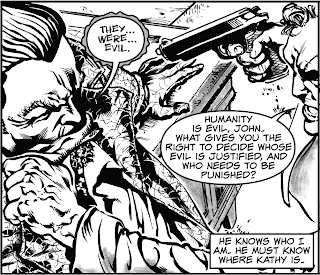 Death of John Morris Part 4: Ashes is a great issue with plenty of action, well written and illustrated, and with a twist for an ending. Having John finally able to speak is pretty awesome considering his charred body and everything hes already gone through. Issue four is another great chapter for the Man of God series in which leaves us in a cliffhanger for the next issue. The issue even had a fourth wall moment when Boone tells him that John isn't Batman and that this isn't a comic 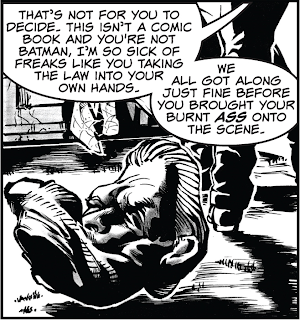 book (Sorry to burst your bubble Detective). All in all, Pinwheel Press has an awesome comic with each issue giving the reader what they want from Man of God. Only time will tell on what will happen in the Man of God universe. Man of God #4  Death of John Morris Part 4: Ashes is available at the Pinwheel Press Store starting at $3.50 for a physical copy and $2.99 for the digital copy. Issue 5 will be released at DanCan in Chicago, IL on September 21st or via there site so you should have enough time to catch up with the series!
Want check out the first issue of Man of God for free? For a limited time only, you can get a digital copy of Man of God #1 for free!
Just click on this link provided!