Harry and the Henaman's Interview

CU: What made you want to work in the comicbook industry?

JH: First question out of the gate and it’s actually the one I had the hardest time with.  If I had to boil it down from the many reasons, I guess I’d say it was because I remember the joy I had as a kid reading comics.  I grew up in rural Iowa and we didn’t have a comic book store, but north of us there was a town of about 20,000 people.  In that town, there was a series of grocery stores, drug stores and gas stations that had decent selections.  I remember during the summer my mom would drop me off at one end of town and I would slowly make my way along the corridor, walking to each spot to see what was new, until I would finally make it to where she worked on the other end.  It was a five mile trek of awesomeness.

After that, comics stoked the imagination to the point where I took every writing course I could as a kid and then as a college student.  Unfortunately, as an adult, I got sucked into the world of corporate America, but I had never stopped writing.  But like most situations, I was constantly waiting for someone to give me the greenlight.  I was always waiting for someone else to give me that go ahead to move forward.  Bigfoot-SOTE was the first idea where I stopped and said, “This is a comic book. I can do this.  I’m not waiting around for someone to tell me ‘no.’”

JH: Rom the Spaceknight. Take the word “space” and add “knight” and you have me lining up.  Plus, what you have is a solitary warrior against a seemingly unstoppable sea of enemies in the Dire Wraiths. My God, what I wouldn’t give for another Rom series.

As far as a villain goes, it’s hard to pick one, but I can tell you my favorite villain TEAM.  Hands down, it’s the Marauders.  A mishmash of badasses.  When they first made their appearance in the Mutant Massacre crossover, they were all over the map as far as members, powers, etc. As a reader, you didn’t know what you were going to get.  A whirlwind chucking ninja throwing stars?  Check.  A man who could build a weapon to take down ANY opponent?  Check. A walking prism? WTF?  The storyline was brutally crazy and the villains were even more sadistic.  As a kid, you really didn’t know what in the hell was going to happen.

CU: Were any of the characters (Besides Bigfoot) inspired by another character?

CU: How many issues do you have in mind for the series? Will the Bigfoot universe continue after SOTE?

JH: Bigfoot – Sword of the Earthman is a six-issue limited series. Will the universe continue after the six issues?  That’s tricky.  I don’t want to give anything away, but issue #1 does have a clue as to the timespan we’re dealing with. It opens with an older, battle-weary Bigfoot (the “Bigfoot on Mars” NASA image) and immediately cuts to a younger Bigfoot in the slave camps. So the question the opening shot of the mini asks is how does Bigfoot get to be that armed-to-the-teeth, battle-weary individual we saw at the beginning?  The tease from issue #1 is whether or not Bigfoot sitting on the rock is the FINAL image of the series?
CU: How big are you planning on making the Bigfoot universe?

JH: As big as the mythos of Mars! Truthfully though, while I can certainly dream big, right now I’m solely focused on the six issues.  As someone who just jumped into the comics pool, I don’t want to fall into the trap of promising the world and not delivering.

CU: What was the most difficult part in the production of Sword of the Earthman?

JH: Making the commitment to self-publish. There are so many factors that go into the production of a comic book, but the most heartburn-inducing nausea was thinking, “Do I have what it takes to see this through?”  Self-doubt was probably the biggest hurdle I had to overcome, but at the end of the day I was forced to come to the conclusion that nobody was beating down my door for a “Bigfoot in space” story.

After that initial first step, it quickly became me asking, “Okay, what do I do next?” until I finally realized the big picture of “How do I make a comic?” was nothing more than me asking the “What next?” question over and over and then seeking out the answers.  As a writer, looking back I realized there are basically three phases.  Writing – Production – Marketing.  Or in other words, creating it, putting it together and getting it out there.

CU: If you got to choose one villain to fight Bigfoot who would it be?

JH: I’d jump out of the realm of comics and choose Genghis Khan. I recently discovered Dan Carlin’s Hardcore History Podcast and his five-part series, “Wrath of the Khans.” It is absolutely mind-blowing what the Mongols accomplished without anyone knowing they were there until it was too late. Bigfoot vs. the Mongolian Horde? Sign me up.


CU: If you got to choose one hero to fight alongside Bigfoot who would it be?

CU: Did you ever have a scene/ issue where you look back and thought "WOW!"?

JH: In the first issue alone, there are so many.  The opening sequence involving the Mars Spirit rover and the reveal of Bigfoot sitting on the rocks is high on my list, but my absolute favorite has to be the sequence involving Bigfoot, Bagworm and the giant ant-like creatures.  Page 18 with Bigfoot going berserk is the money shot, of course, but page 17 is the sequence of panels where Andy just floored me with the layout. The script calls for a simple 4-panel page. 1) The two are surrounded by ants, 2) The swarm drowns Bagworm, 3) Bigfoot drops to one knee, several ants surround him
and 4) Bigfoot disappears amidst the horde.

What I got from Andy was a page nothing short of amazing.  The layout alone is the perfect “How to design a page for optimum impact.”  Ants slowly filling each panel until our heroes are literally drowning in creatures.  The tension is incredible.  Then, when you turn the page…


CU: Is Brewhouse ever planning on doing stories other than Bigfoot?

JH: Absolutely. Right now I’m in that phase of, “What do I do next?” I’ve written a couple of scripts, but haven’t pulled the trigger on seeking out an artist yet.  I’m horrible at multi-tasking, so I tend to obsess about one thing at a time (in this case, Bigfoot.)

CU: Ever planning on selling merchandise for the series?

JH: Honestly?  If I’m allowed to dream big, I could see B:SOTE becoming a toy line down the road (similar to the old school He-Man line from the 80’s), but I wouldn’t know where to begin to even get that ball rolling.  Other than that, I’ve been thinking about t-shirts, posters, etc., but that’s all down the road (but probably a lot closer than actual toys.)


CU: Besides on the west coast of the U.S. are you ever planning on doing conventions closer to the east coast?

JH: Definitely.  I’ve only done three conventions so far, so I suppose you could say I’m still new to the con-scene.  The greatest concentration of indie stores that supported Bigfoot from the very beginning have been out on the East coast, so I’d love to get out there and meet the retailers who gave this unknown a shot and the fans who discovered us.  Logistically speaking, I have a 7 ft. tall Bigfoot standee I’ve been taking to the conventions and it doesn’t break down, so it’ll have to be a road trip!


CU: Is there a release date for issue 4 yet? 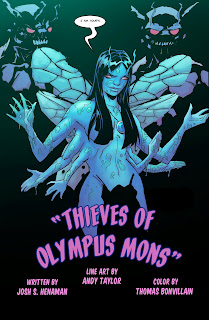 Thank you Josh for this epic interview. With plenty of more issues to come, Comic Unknown will be there to give you the who's who. With an upcoming review of issue 3, issue 4 is just around the corner! Don't forget the first three issues of Bigfoot: Sword of the Earthman are available for purchase here.