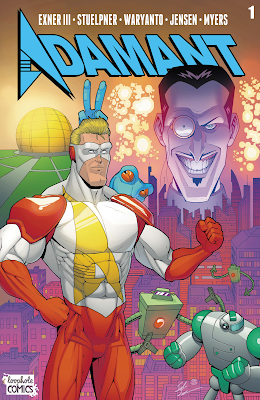 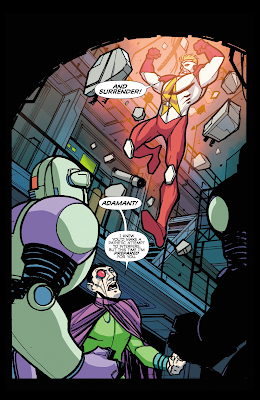 We welcome another super-heroic indie comic (un)known as the Adamant. This self-titled series follows the hero trapped in the future who must find his way back to his timeline. We follow Adamant as he literally crashes in on Dr. Alpha's evil plans in Geneva, Switzerland. Adamant swiftly defeats Alpha's robotic henchmen and then closes in to get the doctor himself. The classic super-hero defeats the villain is quickly cut short as Adamant has a miscalculation in which can destroy the whole base and everyone in it.  As a traditional superhero story, Adamant saves the day! He begins to contain the blast but then suddenly meets his supposed demise and is vaporized giving Dr. Alpha his villainous victory in the end. As most comic readers know, a superhero comic won't just kill off the hero especially not in the middle the first issue of a comic. The reader will begin to learn that Adamant was not vaporized but was just simply teleported to the future. Lost and confused he must find his way home, but how? 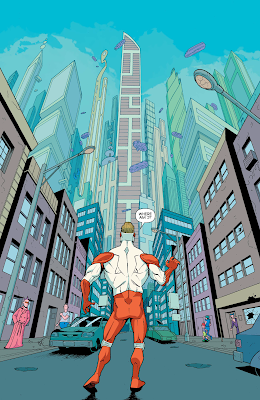 Stated earlier, Adamant started as any superhero tale but with a surprise ending. Written by Mike Exner III who also co-created with Hany Khattab, Adamant is vaguely similar to Jack's situation from Samurai Jack. The great art styles of Adamant is the responsibility of two different artists.  Ian Waryanto was responsible for the first seven pages the story while D.C. Stuelpner drew up until page twenty. The change in art styles occur within the teleportation page and works very well. The future city landscape pages are very detailed oriented and enriches the storytelling since it is a change of time period. Overall the comic was splendid, an excellent read and can easily be picked up by anyone. Adamant Issue One is available via GumRoad or Comixology $0.99, or pay what you want on Sellfy.  While we love to support the indie creators, we also recommend to check out the web-series of the awesome story to get a quick taste which updates every Monday. You can check out their social media sites such as  Adamant's Twitter, Loophole Comic's Twitter & Facebook, and their official site.

WANT TO STAY MUDDY AND BE UP TO DATE WITH EVERYTHING ADAMANT AND COMIC UNKNOWN? MAKE SURE TO FOLLOW OUR FACEBOOK AND TWITTER FOR UP TO THE MINUTE UPDATES AS WELL AS READERS CAN NOW SUBSCRIBE TO OUR EMAIL NEWSFEED FOR REVIEWS, INTERVIEWS AND GENERAL BADASSERY ON ALL THINGS INDIE COMICS! 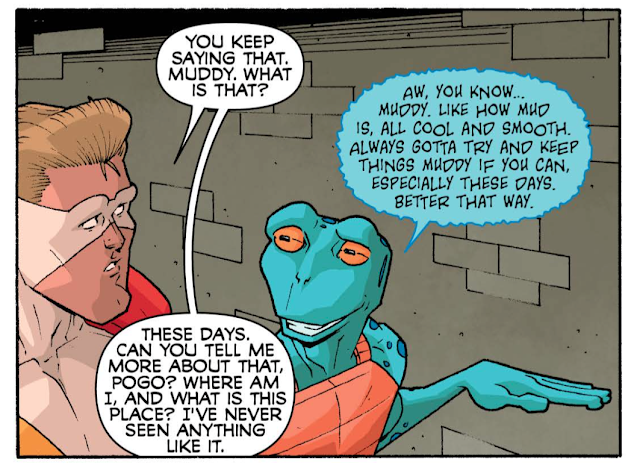