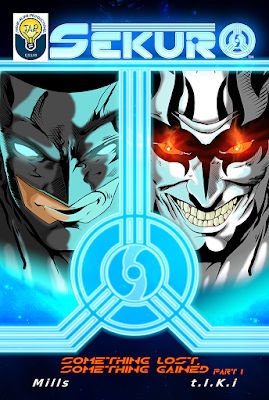 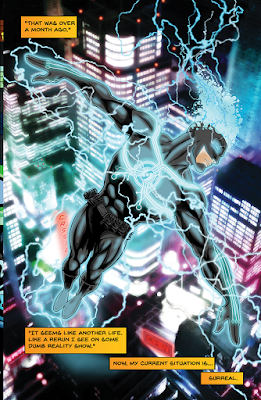 Let's face it, living paycheck by paycheck sucks. Trying to keep your head above water is just another hardship in life and Deven Dalton is one of those people who struggles to make ends meet. He moved to Bay City to make something of himself, but the economy tanked. Deven's unemployment benefits dried up and he's constantly moving from job to job. He is now a security guard and is requested to take a night shift for a private research facility but as luck would have it, a break in occurs and led him to the wrong place at the wrong time or maybe the right time. Sekuro Issue One is the origin story of the young hero. The story puts the reader into what exactly happens that changes his life forever. Besides the obvious new electrical abilities, what of kind of powers will Deven have? The creator Kevan Mills was the helm of this story as not only the creator but the writer, illustrator, and letterer, leaving inks and colors to t.I.K.i. 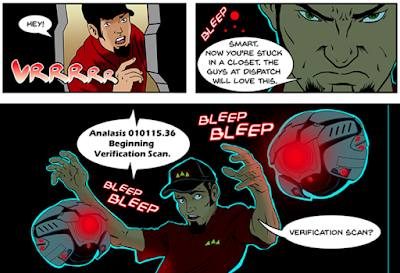 Sekuro ended on a cliffhanger leaving us pondering on what may occur in the upcoming issues. Although few panels may feel like many things are happening at once, the comic has great potential. Confirmed heroes and villains are in the works and can be seen in trading card format via their Kickstarter, the world of Sekuro definitely seems to have established its ground work. Its striking art style combined with the vibrant colors on the pages makes this origin story issue stand out in the indie world. The creative team clearly created something spectacular and we expected that they have much more in store. Sekuro Issue #1 is  26 pages in full color and is available for purchase on ComiXology for $2.99. You can check out Sekuro's social media and support them on Facebook and Twitter.

MAKE SURE TO FOLLOW COMIC UNKNOWN ON FACEBOOK AND TWITTER FOR ALL UPDATES ON SEKURO AND ALL OTHER INDIE COMICS WE REVIEW AND KEEP YOUR EYES OPEN FOR ALL NEW INTERVIEWS WITH THE CREATORS OF THE AWESOME COMICS WE HAVE REVIEWED! 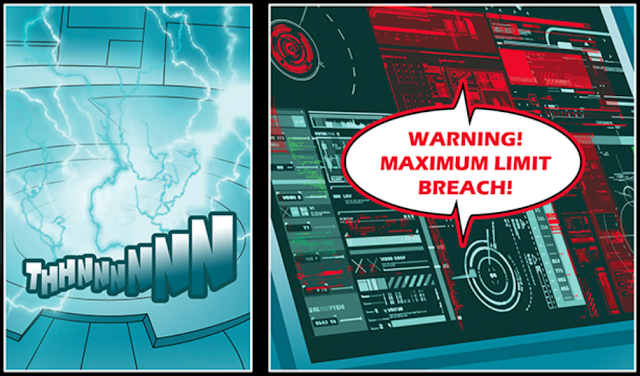