WELCOME BACK TO ANOTHER GREAT ANTHOLOGY AT COMIC UNKNOWN! 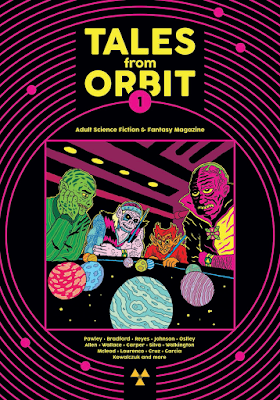 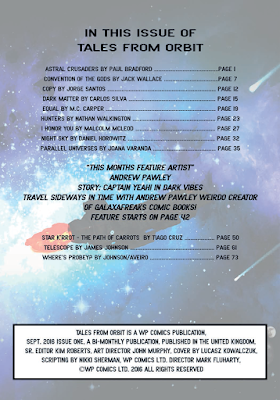 We return with a new anthology not previously seen here at Comic Unknown. Published by WP Comics Ltd., we introduce Tales from Orbit Issue One. Tales from Orbit is a bi-monthly series that showcases great indie creators and their work in the genre of science fiction and fantasy. Having a few familiar names in the list of creators for issue one immediately brings us in like a gravitational pull and we dive into the stories of Tales from Orbit. The issue starts off with Astral Crusaders. Written by Paul Bradford, art by William Allan Reyes, and colors/letters by Erik Korsgaard, Astral Crusaders puts us in the middle of the action where a squadron of the Vermillion Knights landed on the outskirts of the jungle for what seemed to be a simple mission. The Knight's day quickly turns sideways when their communications go down and all hell breaks loose. Astral Crusaders is a well developed six-page story that allows us to venture with these crusaders and gives the reader the opportunity to be entertained from start to finish.


Astral Crusaders is followed by two stories with opposite art styles to one another: Conventions of the Gods and Copy. Conventions of the gods is a mildly silly story written by Jack Wallace, art by Gabe Ostley, and letters/colors by Chris Allen. As the title says, the story is literally a convention of gods showing their best "work" amongst each other and in front of a panel. Conventions of the Gods is short, sweet and funny. Copy uses its wits to tell the story about time. Written by Jorge Santos and art by Gabriela Torres, Copy tells the story of how a parent with a scientific background tries to figure out how to spend more time with his daughter. If goes unnoticed Copy might sneak by the reader even though it is a crafty story with a dark tone to it.

With over ten stories and even a puzzle, Tales from Orbit Issue One packs a galactic punch. The titles in the anthology gives the reader a bit of everything related to cosmic comics and different art styles. including familiar names such as Lucasz Kowalczuk for the cover art and Andrew Pawley with his freaky series "GalaXafreaks". Tales from Orbit is a 72-page out of this world comic fiction that is now available in full color at WP Comics Ltd. Follow Tales from Orbit on Facebook for all the needs of science fiction and fantasy publication from creators all around the world!
MAKE SURE TO FOLLOW US ON FACEBOOK AND TWITTER FOR UP TO THE MINUTE UPDATES AS WELL AS READERS CAN NOW SUBSCRIBE TO OUR EMAIL NEWSFEED FOR REVIEWS, INTERVIEWS AND GENERAL BADASSERY ON ALL THINGS INDIE COMICS!