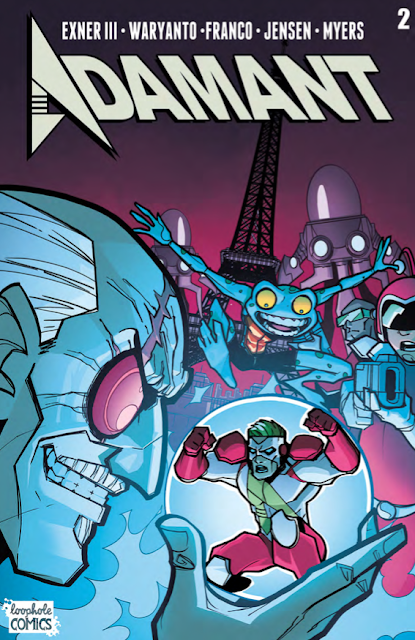 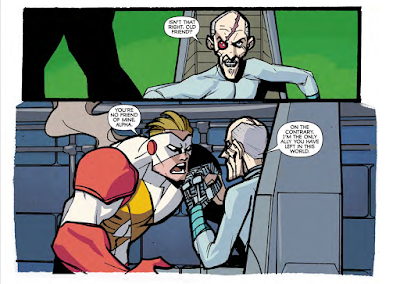 Comic Unknown would like to welcome back Adamant and its creative team to another great review. Adamant Issue 2 begins with a back story in Paris where Dr. Alpha is up to no good (as always). After a few punches, Adamant seems to have saved the day and put Dr. Alpha away. Unfortunately, nothing is what it seemed and what Adamant thought was a victory, might have been the seed to his eventual conundrum. Agitated, confused, and stuck in the future, Adamant is not having it with Dr. Alpha leading a rebellion. Considering the history between these polar opposites, one cannot blame Adamant's suspicion that this may be another ploy from Dr. Alpha. Adamant went on the offensive instead of listening to his old nemesis' story, but realized he doesn't have any ground on this unidentifiable world that he once protected and decided to listen to Alpha's proposal. Dr. Alpha needs his "old friend's" help to stop a bigger threat, a tyrant from destroying the world and nothing is what it seems in this world. Will our hero remain adamant in this dystopian world long enough to return to his own time? Can he trust Dr. Alpha or is just a giant con? Adamant issue 2 is very similar to the previous issue: classic with a surprise ending, which seems to be a good theme for this comic. Nevertheless, kudos to Mike Exner III for this well-written story and for never disappointing thus far. Like the previous issue, Adamant has two artists: Ian Waryanto and Dann Franco. Ian Waryanto illustrated the future timeline and Dann Franco created the prologue or the past timeline. Franco's timeline uses a unique color scheme in contrast to the future timeline to convey the past instead of just using the text "The Past". Adamant #2 is wonderful superhero comic that can give the reader the pleasure of attempting to figure out what will happen on the next issue. Only time will tell what is true and what is not in this bleak future. Adamant Issue Two is via Comixology for $0.99, and don't forget to give them some support by following  Adamant's Twitter, Loophole Comic's Twitter & Facebook, and their official site.


MAKE SURE TO FOLLOW COMIC UNKNOWN'S FACEBOOK AND TWITTER FOR ALL UPDATES ON ADAMANT AND ALL OTHER INDIE COMICS WE REVIEW AND KEEP YOUR EYES OPEN FOR ALL NEW INTERVIEWS WITH THE CREATORS OF THE AWESOME COMICS WE HAVE REVIEWED! 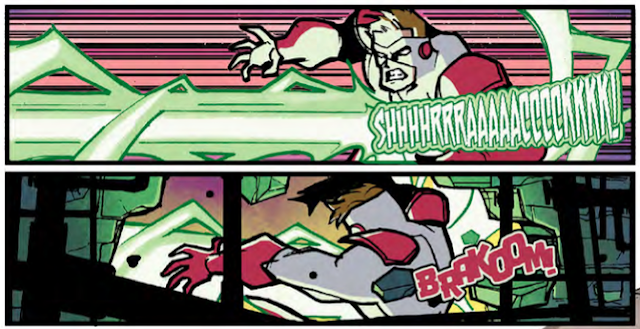