WELCOME TO ANOTHER EXTERMINATING REVIEW AT COMIC UNKNOWN! 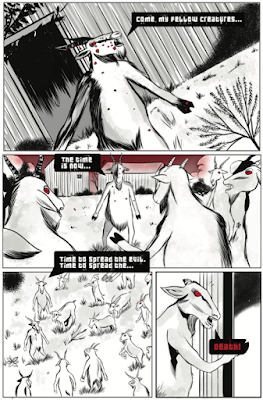 Ever wondered what would happen if an animal had the same intelligence and motor skills as a human out of the blue? Would they attempt to join our communities? What if they obtained this new found ability because they are actually possessed? How high of a chance would they attempt to slaughter us all? The Chinese believed that 2015 was the year of promise and prosperity but unfortunately they were wrong. 2015 is the year of the goat and that only means one thing, the Goatpocalypse! The Year of the Goat Issue One brings us to a world one wouldn't normally think of. An outbreak of possessed goats are roaming the Earth and their main objective is to kill, butcher, or destroy any human that crosses their path. Some believed that the outbreak began somewhere in the midwest while others thought it started in the northeast but one thing is certain, death will be inevitable. The simplest way to imagine this is to think of Dawn of the Dead but with demonic goats instead of the mindless zombies. 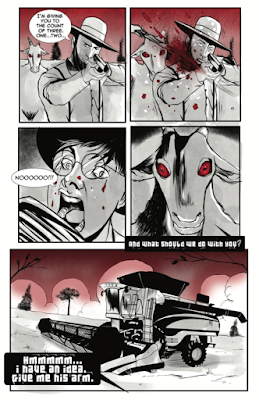 Created by Tom Spellman, The Year of the Goat Issue one was a successfully funded Kickstarter back in 2015 (go figure). The comic puts the reader right into the action and does not hold back anything. The awesome art is done by Rafael Chrestani in which also does the pencils and inks. The uniqueness of this comic is that it is essentially a black and white comic but with red tone colors. The red tone colors, letters and cover colors is completed by John Rudwall. There is also a special variant cover that is available which is by the duo Fahriza Hamaputra and Verry Woong. All in all, Year of the Goat introduces us to a whole new can of worms, the world of the goatpocalypse! With this uprising, we eventually see a stranger walking into town as the end of the issue but who is he and how is he connected to the series. Year of the Goat Issue One can be purchased at Spellbound Comics Store for $5.00 (regular) or $10.00 (variant). Make sure to follow Year of the Goat on Facebook, Twitter, or you can sign up to their newsletter for all updates regarding Year of the Goat. 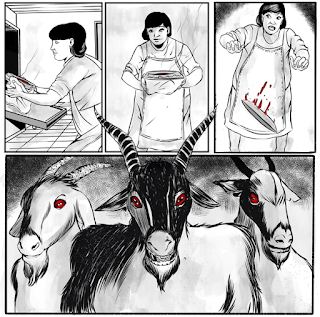 MAKE SURE TO FOLLOW COMIC UNKNOWN'S FACEBOOK AND TWITTER FOR ALL UPDATES ON YEAR OF THE GOAT AND ALL OTHER INDIE COMICS WE REVIEW AND KEEP YOUR EYES OPEN FOR ALL NEW INTERVIEWS WITH THE CREATORS OF THE AWESOME COMICS WE HAVE REVIEWED!
Posted by Jorge Alvarez