Interview in the Litterbox

WE RETURN WITH AN AMAZING INTERVIEW WITH A BIT OF FELINE IN THE MIND. 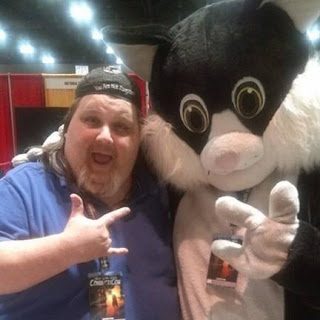 We have a special opportunity to have an interview with a wow factor of comics who was even a pro-wrestler! We welcome Rusty Gilligan to Comic Unknown! In the comic business since 1978, Rusty has been credited in various work including with Marvel, DC, Image, WP Comics Ltd, and much much more. His filming work included movies such as Spider-Man 2, Captain America and the Avengers and shows such as The Walking Dead.


So we begin this interview with Rusty about his comic series Mac and Trouble and himself . 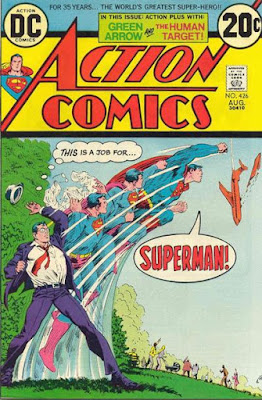 Comic Unknown (CU): What made you want to work in the comic book industry?

Rusty Gilligan (RS): I was 8 yrs old and had just moved to California. My family was having a party and while no one was looking, I snuck out and bought a comic at the supermarket around the corner... DC's "Action Comics"... and it opened a door into a whole new world for me. I was hooked and knew right then and there that comics were in my future.

(CU): How did you come up with the story line of Mac and Trouble? 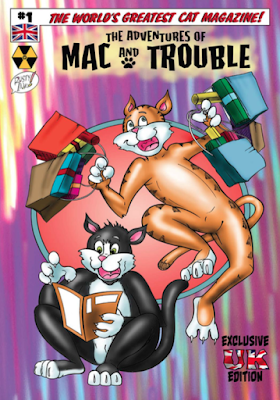 (CU): Were any of the characters inspired by another character or person?

(RG): Yes - Mac and Trouble are 2 of my real life cats (we currently have 10). Mac was born with Cerebellar Hypoplasia, which effects his walking, and as a result he falls a lot... Trouble was a shelter cat that needed a home (he's huge like a raccoon). They became friends from day 1, and ever since have been a huge source of enjoyment to our family. Mac is grumpy and daring - Trouble is clumsy - but they just 'fit' together!

(CU): How many issues do you have in mind for the series?

(RG): I'm really not doing them like a 'series' - I'm basically telling their adventures through the "Mac and Trouble" comic series, the "Amazing Tails" pulp books, and the various news strips. I'm going to be releasing some graphic novels and one-shots in 2017 with them, and exploring some new media.

(CU): Will the comic's universe continue after the series?

(CU): What was the most difficult part in the production of Mac and Trouble ?

(RG): Finding the right creators to work along with me in the beginning. I couldn't have done this without great friends.

(CU): Are you planning on any new series after Mac and Trouble ?

(RG): Yes and no - I do have a few other titles that I'm going into production with, but they fall right in line with Mac and Trouble. I've been reviving some characters that I created years ago for Marvel and others, and adapting them for use with the Mac and Trouble stories. A few have already appeared in Amazing Tails - and the upcoming Amazing Tails novel. 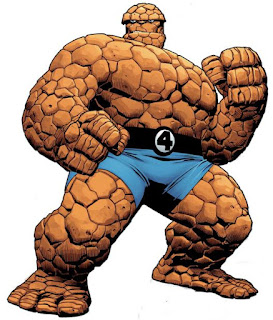 (CU): Who is your favorite all time super hero/villain? Why?

(RG): I've always loved the Thing from Marvel's Fantastic Four - his story is just inspiring to me. He's strong, but gentle... has a strong sense of family... he's survived and overcome his limitations... and he's one of the most trustworthy heroes in the Marvel universe. Regardless of his strength and grumpy demeanor, there's a sort of 'sadness' that surrounds him... and a passion that drives him. There is no story quite like his anywhere. God bless Jack Kirby for sharing his creation with the world. 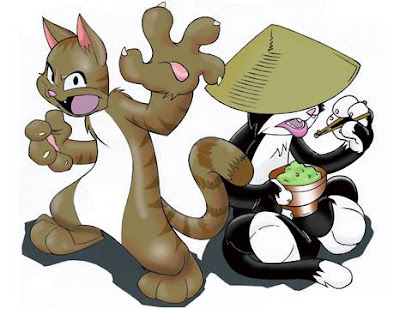 (CU): What is the best way readers can find Mac and Trouble?

(RG): Various ways actually! The have their own website at www.macandtrouble.com - Facebook under 'Mac and Trouble' - Twitter @macandtrouble... they're currently being published by WP Comics Ltd at www.wpcomicsltd.com!

THANK YOU SO MUCH RUSTY FOR THIS GREAT INTERVIEW!! MAKE SURE TO FOLLOW COMIC UNKNOWN'S FACEBOOK AND AND TWITTER FOR UP TO THE MINUTE UPDATES AS WELL AS READERS CAN NOW SUBSCRIBE TO OUR EMAIL NEWSFEED FOR REVIEWS, INTERVIEWS AND GENERAL BADASSERY ON ALL THINGS INDIE COMICS!
Posted by Jorge Alvarez