WELCOME TO ANOTHER APOCALYPSE AT COMIC UNKNOWN!! 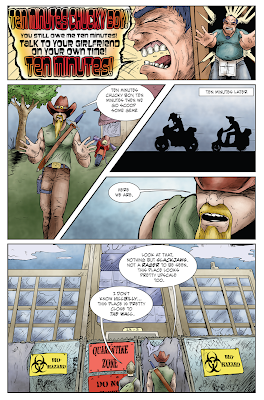 We all have are good days and bad days; whether it's from work or our own personal lives. We usually call it the worst day of our lives, and that's in our modern society. Now think of a place in time where your job is dressing up as a hotdog everyday and advertising your shop, meanwhile killing zombies between breaks. We have it easy now if we lived in a world like that. In Worst Day Ever, society is at peace sort of speaking, where killing a zombie is almost mediocre. The story follows Charlie, I guess you can call him an average Joe; except for the fact he has a shotgun with him all the time. His day began like every other day, fighting zombies in the hall, riding his moped, killing a zombie, going to a cafe for his morning Joe and crushing on the barista than killing a zombie. We see Charlie and his partner in crime Bill (literally), raiding compounds and abandoned facilities in their free time to scavenge whatever they can. That evening the two found their way to the top of a facility hoping to find some high-end product to swipe but instead welcomed by another group of looters. The odds were in other groups favor, five people versus two. Hope seem grim for Charlie and Billy and the tension between to two were put to a halt when zombies crashed the party. Will they put their differences aside to stay alive? Or will it be a bloody free for all? 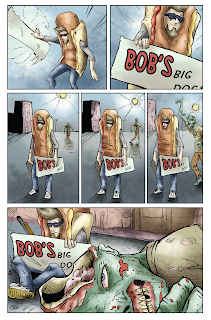 Recently funded in Kickstarter on May 2016, WDE is the Clerks meets Zombieland comic that is much needed. WDE has the unlimited potential to entertain their readers as well as illustrate a world where having zombies is part of one's daily routine. We expect to see this world grow with an expansive developed story. We wonder what can actually occur in a society that manages to be stable after a zombie apocalypse. While it is still not available to the public, Worst Day Ever Issue one is available for pre-order for $3.99 with the release date of August 24, 2016. Worst Day Ever will be a 12 issue mini-series with the entire arc already scripted by Westley Schomer and the pencils and inks under development by Luke Stone and the colors by Patrik Mock . You can follow Tenacious Comic's Facebook and always keep an eye out for them on Kickstarter for any new projects they are developing.

KEEP UP TO DATE WITH COMIC UNKNOWN'S INDIE COMIC REVIEWS AND INTERVIEWS BY LIKING US ON FACEBOOK AS WELL AS FOLLOWING US ON TWITTER.
Posted by Unknown