WELCOME BACK TO ANOTHER REALITY AT COMIC UNKNOWN! 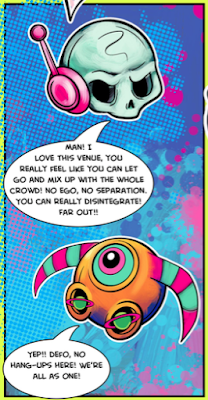 We return to the mindbending story teller only known as Andrew Pawley and his face-melting book GalaXafreak! We follow the freaky squad in issue three with one thing in mind. What do they do on a Saturday night? They do what any freaky set of dudes will do and go clubbing! Optik, Captain Yeah!, and Ringzola head out to the Particle Club to catch the trippiest DJ out there, Boomertron! Right when they start slipping into amazing cosmic vibrations, things begin to go awry. Consumed by a dark worm, Boomertron is now spewing negative vibes and only the GalaXafreaks can stop it. With a new foe causing the damage, what extent must the freak go to the end the bad vibes and return to the idyllic state they were in. GalaXafreaks Issue Three also brings back the Cosmic Freak last seen in issue one. After converting himself into his very own reality, Rainbow Streak Cosmic Freak is confronted with the Blob Queen. What could possibly go wrong with this meet-up? The only way to find out is by checking out GalaXafreaks Issue Three. 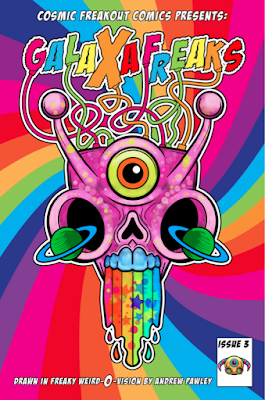 As always, the art of the story is what draws us to this trippy comic and the  stories has glued our eyes in a freakish way to the pages keeping track of what these freaks are up to.  Andrew Pawley's unique art style is a rare gem that is not normally seen in this medium. GalaXafreaks is definitely the eye candy one would search for in a comic as its combination of euphoric art and psychedelic storytelling is out of this world. If you have not been caught up with these freaky adventures, you can  receive the first two issues for FREE!!!! Now is your opportunity, by simply signing up to the newsletters of GalaXafreaks you will receive a digital copy of issue One and Two. The Trade paperback is now available so fans out there can catch up with any of the issues in the first series for one simple price. Make sure to trip out and follow GalaXafreaks on Facebook & Twitter! 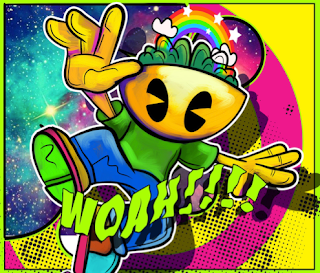 AVOID MISSING ANY REVIEWS AND FOLLOW US ON FACEBOOK AND TWITTER TO GET UPDATED ON OUR NEW REVIEWS, INTERVIEWS OR GENERAL BADASSERY.
Posted by Jorge Alvarez