Cock with the Glock

WELCOME BACK TO ANOTHER COOPED UP REVIEW AT COMIC UNKNOWN! 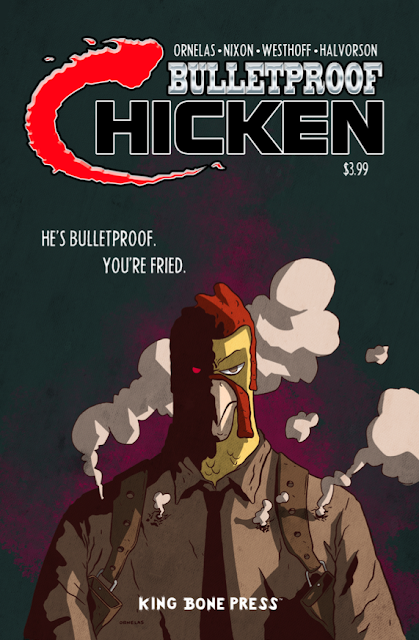 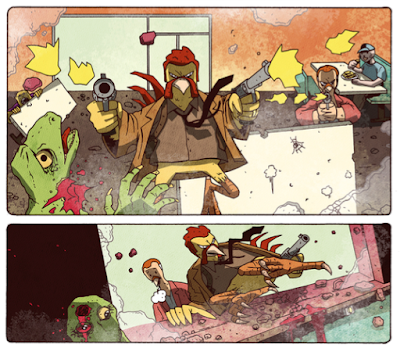 Imagine a gritty world of violence, language, and walking talking chickens (yes, chickens). We enter the world of BulletProof Chicken or BPC for short. BPC follows two buddy cop chickens to their last bust.  BP and Ed goes in, guns blazing as if they are in a Hotline Miami game to save BP's wife Lisa and take out the Cluck Twins, leaders of the lizard gang. They find themselves in Harold's Shack, a fast food joint and all hell breaks loose. Bullets fly and the two cops push through the reptilian menaces to find BP's wife with an amputated leg. The anger and revenge gets to BP's head and confronts the mob boss and fights to the death. Ed retires two days later and eventually finds love with the newly widowed Lilly. Eight years pass by and all of a sudden the Lizard mob begin to drop like flies. Wishful thinking from the police department that BP is alive, Ed is still a bit skeptical on who is causing these murders. 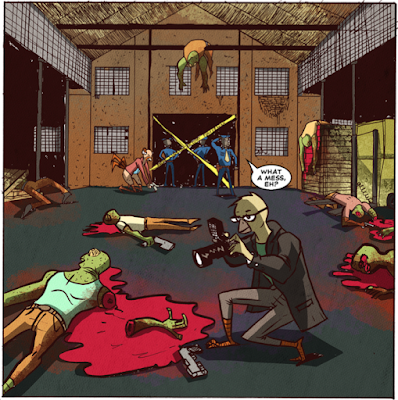 BPC Issue One continues through the rest of the issue to be a hand grenade of violence, vulgar language, and hilarity for the readers. Published by King Bone Press, BPC Issue One was created by Jon Westhoff and Bobgar Ornelas. The issue can be enjoyed by chicks and reader alike stuffed with action and fowl language. Written and lettered by Jon Westhoff, the story easily has a mind of its own with its over the top mindless violence and fun. Bobgar Ornelas and Mat Nixon both provide the art for the story and it perfectly brings the story to life as their art flawlessly shifts between the pages. David Halvorson is the colorist of the issue and  is the person that puts the final touches to make this comic stand out from other comics out there. This creative team easily entertains the reader the way they should be: blood, gore, profanity and chicken. You can purchase Bulletproof Chicken Issue One in print for $2.00 or digitally for $1.00. Bulletproof Chicken will also be available as a trade paperback in an ongoing Kickstarter created by King Bone Press. Make sure to follow King Bone Press on Facebook and have fun tweeting Jon Westoff and Bobgar Ornelas with some chicken puns. 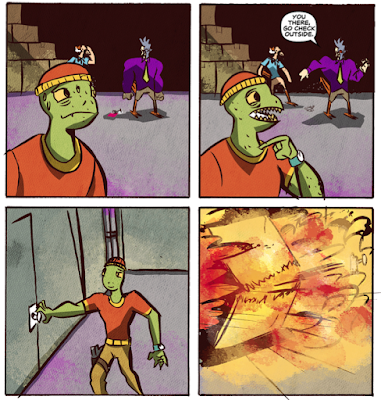 MAKE SURE TO FOLLOW US ON FACEBOOK AND TWITTER FOR ALL UPDATES ON BULLETPROOF CHICKEN AND ALL OTHER INDIE COMICS WE REVIEW AND KEEP YOUR EYES OPEN FOR ALL NEW INTERVIEWS WITH THE CREATORS OF THE AWESOME COMICS WE HAVE REVIEWED!