WELCOME BACK TO ANOTHER CATACLYSMIC CHAPTER OF COMIC UNKNOWN!
TODAY WE INTRODUCE RIVER COMIC'S
BARCODE CATALYST 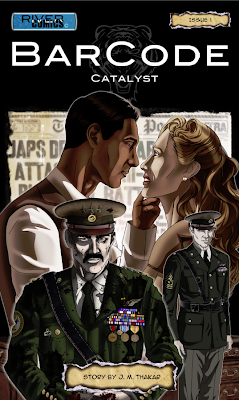 BarCode: Catalyst is the first part of the groundbreaking three part series. It is an epic tale echoing the journey of the Odyssey, merging historical fiction and sci-fi through a chronicle of the imprisonment of a scientist during WWII, and his quest to return home to his wife. The story is set in the Pacific Jewel Islands, a historical locale modeled after the Philippines. The PJI are a collection of four island provinces originally inhabited by indigenous Asiatic peoples, and now controlled by a white English speaking colonial government. 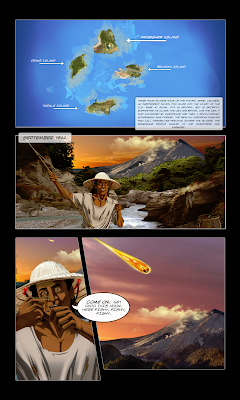 Throughout the story we find Dr. Verma being escorted by General Martin to the location of an asteroid that crashed into Mt. Golo, causing it to erupt. Close to the location is a village being engulfed by the lava and while Dr. Verma attempts to rescue some, his struggle only went so far. We soon discover that the reason why General Martin is leading Dr. Verma into this dangerous situation is for these blue fragmented rocks that are more than just vibrant ores. With a villager quicly getting one in their possesion, the villager is instantly affected by the rocks influence. With not much to be done left on the island, the two managed to narrowly escape the island unlike most. 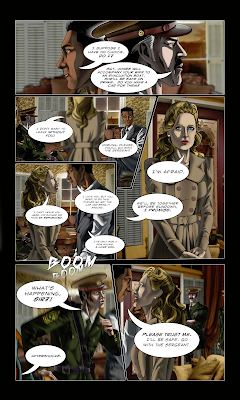 Barcode Catalyst's illustration has hints of realism throughout its vivid scenery/background. Issue One begins to show an interesting twist into history during WWII; it gives us a refreshing tale and is keeps us in a mystery about whats going on. With an asteroid that has side effects on human beings, how will this new potential asset portray into the war? Only time will tell until the next issue will be released. Barcode Catalyst is available with an awesome discount that River Comics provided Comic Unknown of 25% OFF at checkout with the code RCFB813. So make sure to get your hands on it with the promo code!


With more to see of Barcode Catalyst, keep yourself up to date at Comic Unknown for everything indie!!!
Posted by Jorge Alvarez