Welcome to the SciFi-Western world of Death Rattler, where futuristic technology is the norm but we still have our cowboys or bounty hunters galavanting and causing chaos. The story follows Dawson Coles, a young woman who will stop at nothing to destroy and seek revenge on the gang that caused the death of her family. She is dubbed Death-Rattler as her bullets are laced with the poison of the Death-Rattler snake. In her mission to kill all of the Devil's Cross gang members including the gang leader, she begins to hit a snag the moment she has a bounty on her head. With bounty hunters on her tail, she must think fast on how she can complete her objective. Some hunters include but are not limited to a large gun for hand bandit, a Texas ranger, and a spiritual Native Indian tracker. The cast of the series can not go unnoticed as even the most minor characters have distinct physical traits. The characters are easily fleshed out and can even have their own mini-series if there was enough interest.


Death-Rattler is undoubtedly a fun read and the polished illustrations are not overlooked. The suggestive art style may be a fundamental reason some audience would be drawn to the series, but the story ices the cake. Death-Rattler is the much needed western vengeance story the comic world needs. The series throws the audience into a dangerous adventure with only one thing in mind: Get the Devil's Cross Boss. Currently in the third issue, the four part series has action that does not disappointed.  It is recommended to take the plunge into the Rattlerverse especially if the opportunity to binge read the issues is available. The only limitation Death-Rattler might have, is not making the series into a five issue series and giving the hunters a more detailed backstory. All characters stand out so well that some deserve additional panels of story.  Having the series slowly creeping to a close, what new obstacles must Dawson Coles overcome to reach her goal? 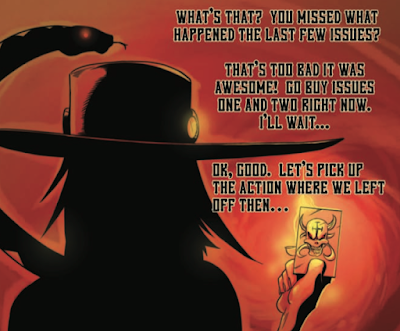 Created by Kelly Bender (writer) and Ryan Downing (illustrator), the creative team also includes Ivan Mirander as the inker, Alan Bay as the colorist and Micah Myers as the letterer. The collective effort from these creators definitely pay off as Death-Rattler finishes. Published by Insane Comics, each issue can be purchased from Insane Comic's site both digital or in print or Death-Rattler can be purchased digitally via Comixology. Readers can catch Kelly Bender, Ryan Downing, Alan Bay and Micah Myers on Twitter as they post updates as well as any new comics they may be working on.


MAKE SURE TO FOLLOW US ON FACEBOOK AND TWITTER FOR ALL UPDATES ON RADIATION BURN AND ALL OTHER INDIE COMICS WE REVIEW AND KEEP YOUR EYES OPEN FOR ALL NEW INTERVIEWS WITH THE CREATORS OF THE AWESOME COMICS WE HAVE REVIEWED!
Posted by Jorge Alvarez