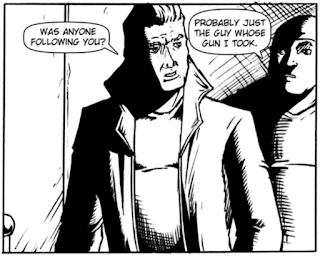 Welcome back to another chapter of Chem 19 with Comic Unknown! We return to the series at issue seven and see that Dr. Wagner is still tied up and held captive by the Cartel. Dr. Wagner needs to figure out what he can do to escape but there was an unlikely person to help him. With the help of Donkey and his addiction to the drug, Donkey managed to sneak into the building and he begins his search. Uncertain whether we wants to find the drug more or the doctor himself, Donkey finds the mother load! After a few hurdles Donkey had to overcome, he managed to stumble upon Dr. Wagner.  Now it is time for them to escape and they are facing obstacles to be home free. We have been following Dr. Wagner's unfortunate adventure for some time now and we have been hooked on what to expect. While the story has had seven issues to develop, we are still running through this dystopia to find the cure to save Dr. Wagner's daughter. Even though Vivian wasn't seen in this issue, it puts an interesting question into perspective: how much time does she have left?


Jason has gone through hell and back to find any amount of dosage of the deadly drug for his daughter and now needs to find a way to escape the city. Having issue seven come to an end, we continue to ponder on how Dr. Wagner will return to his daughter and whether will he find a cure not just use the drug to prolong death. Kevin Truglio and Przemyslaw R Dedelis has formed the degraded world of Chem 19 and has allowed us to follow a father and his unstoppable will to do anything he can to save his daughter. Chem 19 Issue Seven is now available on Comixology at $0.99 digitally and will soon be available physically on IndyPlanet (So keep an eye out!). Stay addicted to the degraded world of Chem 19 and follow it on Facebook to keep up to date with any news related to the destructive drug, Dr. Wagner, Vivian, and even Donkey!

STAY TUNED TO COMIC UNKNOWN FOR FUTURE POSTS OF CHEM 19 AND DON'T FORGET TO FOLLOW OUR FACEBOOK AND TWITTER FOR UP TO THE MINUTE UPDATES AS WELL AS READERS CAN NOW SUBSCRIBE TO OUR EMAIL NEWSFEED FOR REVIEWS, INTERVIEWS AND GENERAL BADASSERY ON ALL THINGS INDIE COMICS!