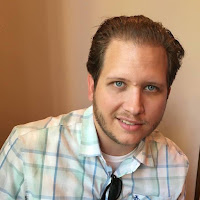 WELCOME BACK TO AN AWESOME INTERVIEW HERE AT COMIC UNKNOWN!

We had the opportunity to ask Caleb Thusat the creator of Alter-Life a few questions on his book and himself! So sit back and enjoy this awesome interview with Caleb. 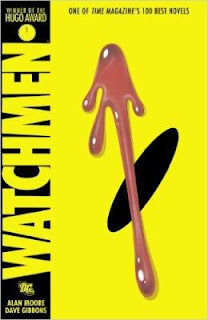 Comic Unknown: What made you want to work in the comic book industry?

Caleb Thusat: I came to comics later than most people do. I didn’t think much of superhero stories other than the ones I saw in movies in the 80’s and 90’s, but I watched a lot of the X-men cartoon while growing up. My passion for comics didn’t come until I read The Watchmen. Alan Moore opened my eyes and imagination to what the comic medium could be. I worked in independent film for a number of years, and ideas are limited by budget and physical restraints. My ideas were too large for indie film, so I decided to bring them to an artist and create comics instead.

CU: How did you come up with the story line of Alter-Life?

CT: Alter-Life is sort of a combination of stories I have been toying with since I was in college. I knew I wanted to write something about alternate existences and the mystery of human consciousness. The story is rooted in some of my personal experiences and some of my fears. Death is a universal topic of fear and mystery, and I am always exploring new ways of writing about it. I also had some rough years where I felt trapped and needed an escape from my job. Alter-Life was born out of all of this. 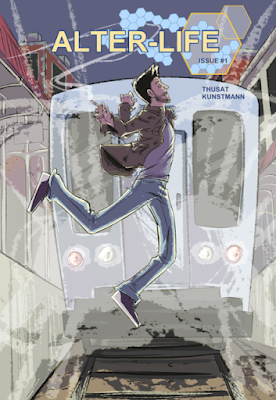 CU: Were any of the characters inspired by another character or person?

CT: Jake in Alter-Life is loosely based on Rob Gordon from High Fidelity with pieces of me thrown in here and there. He’s a bit quirky and obsessed with music and video games. But he is a broken man, seeking answers and redemption for past regrets.

CU: How many issues do you have in mind for the series?
CT: This is going to be 5 issues. I’m actually in talks right now to get the full series made as a complete graphic novel and sidestep the whole issue by issue process.

CU: Will the comic's universe continue after the series?
CT: There is definitely a universe being created here, but it’s not what is seems to be in issue #1. There are many twists and turns, and I don’t want to spoil anything, but let’s just say Jake’s story is just the beginning. 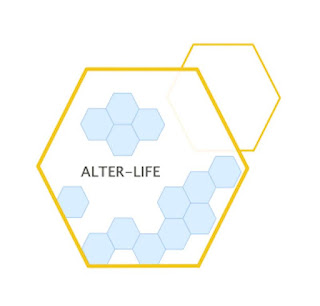 CU: What was the most difficult part in the production of Alter-Life?

CT: I’m just a writer and creator. I came into this with zero connections in the comic industry, so I would say the most difficult part is finding an Artist who, not only can give you want you want, but is willing to work with someone new to the comic world. I was fortunate to find Katrina Kunstmann. I think she lives inside my brain because every time she sends me a page it is almost exactly what I had pictured. Running a Kickstarter is hard too. It requires your full attention for the length of the campaign, and you can hardly think of anything else, but if you’re willing to put in the time, you can be successful at it.

CU: Are you planning on any new series after Alter-Life? 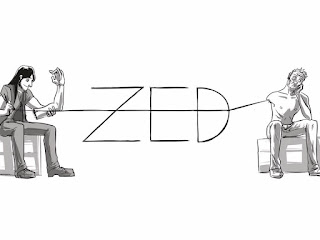 CT: Well, ZED issue 1 has just been released. I have been working on completely writing issues 2-5 of Alter-Life, and I wanted to keep readers happy, so I decided to start ZED. It’s way different than Alter-Life, and is much more fun and comical. I also wanted to show people that I have some depth and can write both deep and serious and fun and humorous. After ZED and Alter-Life I do have a number of other stories I am working on, but they are early on at this point. For now, I am working to get the Alter-Life graphic novel produced and will continue to write ZED and release it issue by issue on Kickstarter.

CT: Superman is one of my favorites. I love characters that have been adapted to reflect the times, and Superman has one of the most versatile stories. It’s simple, but can be used to tell such diverse and interesting stories.

CU: What is the best way readers can find Alter-Life?

CT: Right now you can only buy Alter-Life off my website www.villagecomicbooks.com. However, issue #1 will be up on Comixology very soon.

THANK YOU SO MUCH CALEB FOR THIS AWESOME INTERVIEW!! MAKE SURE TO FOLLOW COMIC UNKNOWN'S FACEBOOK AND AND TWITTER FOR UP TO THE MINUTE UPDATES AS WELL AS READERS CAN NOW SUBSCRIBE TO OUR EMAIL NEWSFEED FOR REVIEWS, INTERVIEWS AND GENERAL BADASSERY ON ALL THINGS INDIE COMICS!
Posted by Unknown

All Things Bigfoot Sword of the Earthman

All Things Chronicles of Terror

All Things The Hitch-Hiker

All Things Mac and Trouble

All Things Man of God

All Things The Nightmare Patrol

All Things The Shepherd

All Things The World Hates Jimmy

All Things Worst Day Ever!

All Things Year of the Goat