WELCOME BACK TO THE DESTINED JOURNEY AT COMIC UNKNOWN! 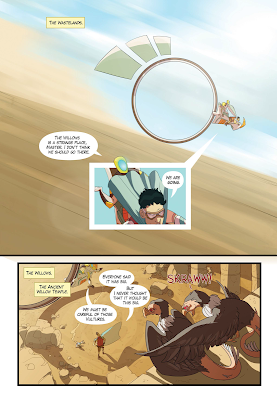 We return to the world of Arin, a desolate planet where the rich are freely enjoying their lives in the Floating City. We find our protagonist Aiden right where we left off from Issue 1 of Scavenger in search for answers. With the death of Aunt Maude in Tin City, the only option he has is to go to The Willow to search for the truth on what is going on. Trouble is not that far behind him considering that the Floating City is tracking his every move with the visions Laverne has with Aiden and  the Acurvina plant he is carrying. Finding out the truth about his mother and the innate magic he may possess, Aiden and company must escape Caleb and his fleet as they have been chased all the way to Nebulous a city filled with thieves. Aidan is now on the journey to find out what he must do to save his mother in Floating City and clearly become the hero he will soon be. 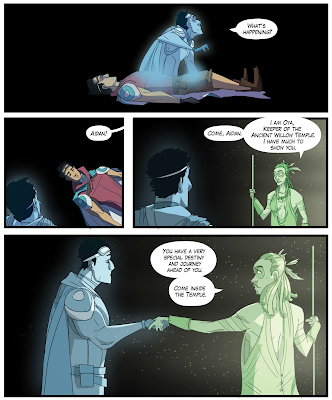 Scavenger Issue Two leaves the readers at the start of a journey which seems will eventually put us in a battle of brawn and enchantments. The artist's hard work puts us in the start of a new series as if it is a cartoon one may find on cable television and having us frantically waiting for the next episode the following week. The only difference between that and the comic is that the time frame is much longer than a week. We are hopeful to see how the story telling of Scavenger builds throughout the series and what other surprises comes out of the narrative. So far the Scavenger series is definitely a series to be keeping track of the release dates as well as enjoying the developing world of Arin. Scavenger Issue Two was released yesterday on Comixology for $1.99. Check out Markosia's website for any other comic or graphic novel they may be releasing in the near future.


MAKE SURE TO FOLLOW COMIC UNKNOWN'S FACEBOOK AND AND TWITTER FOR UP TO THE MINUTE UPDATES AS WELL AS READERS CAN NOW SUBSCRIBE TO OUR EMAIL NEWSFEED FOR REVIEWS, INTERVIEWS AND GENERAL BADASSERY ON ALL THINGS INDIE COMICS!