WELCOME TO ANOTHER HEROIC SMACKDOWN AT COMIC UNKNOWN! 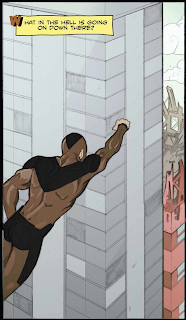 We travel to Havenport City to see the story of this superhero comic: Gritt. Gritt and many others travel from the fallen planet of Aralios to the distant planet many of us know as Earth. Created and illustrated by Jordan Johnson and written by Max Milne, Gritt shines as the underdog hero as we follow him along with Glory catching no good chumps and assisting the police department of Havenport City. We see Gritt's perseverance and courage when he has to face off against Vigor the Great Warchief. Vigor is known for his triumphs over the famous Validus nation and even after every hit Vigor delivers, Gritt takes them as a champ demonstrating his perseverance once more. He does not give up, he plays his strengths, and maneuvers the battle to his benefit (somewhat). Gritt has the ability to fly and shows he can get a major butt woopin' and yet still manage to stand up and never surrender. 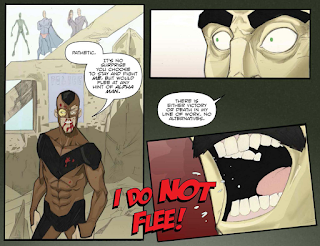 Gritt Issue 1 has not done much of development but it leaves a good impression to the reader. It gives us that underdog story with a side of superheroes. We see many characters in the issue which gives us the idea for a deeper story that we cannot wait for. While it ends in a cliffhanger and leaves more questions than answers, Gritt is a sucker punch to any villain out there. We expect to see more of Gritt and want to see how his story continues to develop. He is now part of Short Fuse Media Group's roster and he can be found in Heroes: Ignited Anthology with his own short story. Gritt Issue One can be purchased digitally or physically from IndyStash's monthly packages here for 5.00 and 12.00 respectively which includes FOUR different indie books.

WANT TO SEE MORE OF GRITT, SHORT FUSE MEDIA GROUP, OR INDYSTASH COMIC REVIEWS? MAKE SURE TO FOLLOW COMIC UNKNOWN'S FACEBOOK AND TWITTER  FOR UP TO THE MINUTE UPDATES ON REVIEWS, INTERVIEWS, AND GENERAL BADASSERY ON ALL THINGS INDIE COMICS!
Posted by Jorge Alvarez