WELCOME TO ANOTHER MYSTICAL CHAPTER OF COMIC UNKNOWN 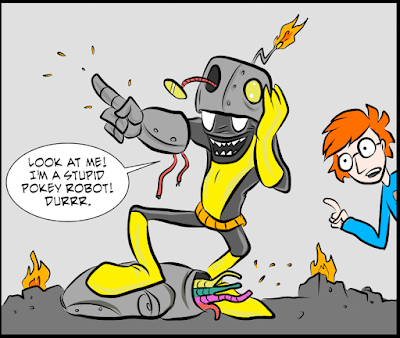 We're sure we were all asked at some point in our lives: What super power would you have and how would you use it? And some of you will use it for the greater good, right? Today we introduce, Ethan Kocak's Black Mudpuppy and his comic is different and refreshing. Xolotl, the Aztec god is seen using his powers for his self-interest and mischief. Confronted by Quezalcoatl, Xolotl is imprisoned in the body of an Axolotl (salamander). After 500 years of his imprisonment, Quezalcoatl gives Xolotl a chance of redemption: his powers return bit by bit for every good deed he performs.

The book is actually the first three stories from Kocak's webcomic series with minimal variances (The Obligatory Origin Story, The Invisible Deaf Mute, and Hitlersaurus). It also includes a few short stories and a stetchbook of his early work. Xolotl fights evil where ever he goes, and like life, it doesn't always go according to plan. Although the novel contains only three major stories, it sure is sweet. It's a simple comic relief on what we all want to do if we had super powers. Besides this book, Kocak many more stories following the Black Mudpuppy such as Doctor Hypochondria, Psychopomp & Circumstance, and many more.


If you're looking for a fun and unusual comic, start with this one. Ethan Kocak writes, draws, interpretive dances and otherwise creates The Black Mudpuppy entirely out of pixels and spite. He cannot be filmed and is invisible to owls. If you’d like to read more comics, buy official Mudpuppy merchandise or yell at him on the internet, go to: www.blackmudpuppy.com.

WANT TO FOLLOW THE MISCHIEVOUS GOD AND ALL OTHER BOOKS MENTIONED IN COMIC UNKNOWN? MAKE SURE TO FOLLOW US ON FACEBOOK FOR THE LATEST UPDATES, NEWS AND EVENTS GOING ON IN THE INDIE WORLD!
Posted by Jorge Alvarez